Star Trek: Deep Space Nine ran from January 1993 through April 1999. The show was an anomaly in the Star Trek universe: instead of being about the crew of a starship seeking out new adventures in different locations every week, this series was about the inhabitants of a space station (Deep Space Nine) and the social and political turmoil that centered on that location.  One comparison that has been made is that if the original Star Trek was “Wagon Train to the Stars,” ST:DS9 was “Gunsmoke in Space.” 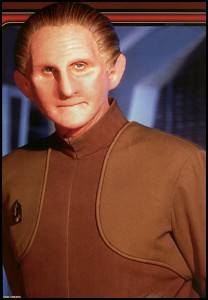 René’s character on ST:DS9 was Odo, the head of station security. Follow the links below for more details about Odo and the world of Star Trek: Deep Space Nine.