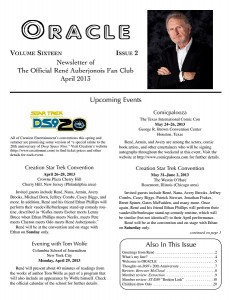 ORACLE is an association of René’s loyal fans, devoted to celebrating René’s talents as an actor and artist and supporting his charity fundraising efforts.

For over 20 years, ORACLE published a quarterly newsletter, full of interviews, convention reports, reviews of plays and movies, and discussions of other topics of interest to fans of René.

Because so many fans are now happy to keep up to date with René online, via his Twitter account and Internet news sources, the final issue of the printed newsletter appeared in October 2019, and we are no longer collecting dues or offering “memberships” in that way. 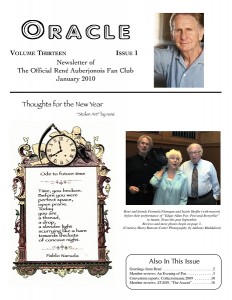 However, we have an extensive archive of back issues of the newsletter and hope to eventually make those available for sale to support René’s charity fundraising efforts.

(ORACLE is not a registered charity itself, but we keep careful accounts of all donations made through our charity fundraising projects, as well as general membership dues.)

How it all began… 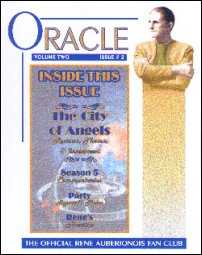 It all started with Lisa Wilcox, an avid Star Trek fan. Lisa decided that she liked and respected not only the work that René Auberjonois was doing on Star Trek: Deep Space Nine but the personality and values that came shining through René’s comments and interviews as he began the new series. She thought that René sounded like an all-around nice guy, in addition to being such a talented performer.

Next thing she knew, René invited her to lunch and asked her, “Well, do you want the job?” The “job” under discussion turned out to be heading up a fan club for all of the folks who were showering René with letters and requests for further information. And so ORACLE was born – an outstanding organization devoted to an outstanding person!