Review: We All Fall Down

We All Fall Down

Excerpts from a 2000 press release

August 15, 2000– Vancouver-Road Cone Pictures and Maybe The Moon Productions Inc. are pleased to announce that Martin Cummins’ first feature We All Fall Down has been chosen to screen at the 25th Toronto International Film Festival (September 7-16, 2000). 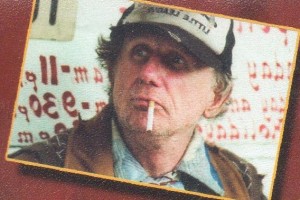 “Tim” from We All Fall Down

We All Fall Down is a semi-autobiographical story loosely based on Martin Cummins’ experiences living in Vancouver’s downtown eastside. The film explores the journey of two young men (Michael and Kris) whose paths are tragically intertwined. It is a story of love, friendship, betrayal, addiction, and re-birth set against the bleak backdrop of the inner city as ad-hoc “families’ are formed in a world inhabited by drug addicts, prostitutes, and indigents.

The film stars Darcy Belsher (The Guilty) who plays Michael (a character inspired by Cummins’ own experiences), a young man who tumbles into the dark world of drugs following the death of his mother. Michael’s habits are fuelled by his friend Kris (Cummins), a longtime addict on a steady downward spiral. Their relationship is further complicated when Michael finds himself falling for his best friend’s girl, Ryan (Francoise Robertson, More Tales of the City).

As Michael wanders through the eastside he encounters several characters who change his life forever through their words and actions–conscious or unconscious. Among them are: Bruce (Nicholas Campbell, Da Vinci’s Inquest), a soft-hearted restaurateur; Sherry (Helen Shaver, Poltergeist, who also executive produces), a prostitute Michael and Kris have befriended; and an indigent with a wry sense of humor, Tim (René Auberjonois, Deep Space Nine.)

The spirit and heart of the storyline for We All Fall Down was mirrored by the cast and crew, who donated their time to the project.

“Fall Down was an entirely volunteer effort,” says Cummins, who wore four hats for the film. “I am most proud of that…of our ragtag group of film folk and what we managed to do with not a lot of finances but a lot of individuals with a lot of character. I am so pleased for our group that our film will be shown as part of Toronto’s festival.”

Belsher echoes that thought. “Needless to say, everyone worked hard, for no money, still smiling at the end of each day. This is a reflection on Martin Cummins, whom I am honored to have portrayed.”

Ledford, who executive produced and has a cameo in the film, adds “We All Fall Down is a film that was shot from the heart. Getting accepted into the Toronto International Film Festival is a great affirmation and a huge honor for our little film.”

Executive Producer Bonell says “My suggestion to anyone involved with a first effort in producing an indie, low-budget film is to surround yourself with as many friends as you can. It just makes an impossible task that much easier.”

We All Fall Down had its world premiere at this year’s Floating Film Festival in January. Cummins’ acting experience has been diverse. His credits include four seasons playing “Nick,” a starring role on Poltergeist: The Legacy. He later went on to direct several episodes of Poltergeist and The Outer Limits.

We All Fall Down

On my first attempt to watch this film, I could not sit through more than half an hour due to the brutally honest portrayals of addiction and grief set in the desperate world of Vancouver’s downtown eastside. I was much more impressed the second time with this thoughtful work by a young filmmaker. The film was made over 13 days on location in Vancouver, British Columbia and the cast and crew donated their time to the project.

The film initially appears to be about the friendship of two young men, Michael and Kris, but evolves into a story of how the former deals with his mother’s death and the latter comes to terms with his drug addiction. Immediately after his mother’s funeral, Michael falls into Kris’ world of drug abuse, but discovers very quickly that he can’t function as an abuser. What complicates his life further is the fact that he is falling in love with Kris’ girlfriend of eight years, Ryan. During their binge, they are not only emotionally abusive to their friends, but viciously beating a neighbourhood dealer.

The “family” that they have created around them include Bruce, the local restaurant owner; Sherry, a prostitute that they get high with; and Tim, the street person who lives in front of Bruce’s restaurant. We see Michael and Kris stumble through their days, getting high, trying to find work–Michael is a struggling actor and Kris is an artist with his first show. It’s painful to watch them, knowing that they’ll end most days strung out on heroin. As Michael realizes he has to get away from this environment in order to stop, Kris falls deeper into his addiction.

Michael has been offered money by Bruce to travel to Toronto to visit his absentee father. After deliberating for several weeks, he accepts the offer and asks Ryan to join him on the trip. Ryan has realized that Kris will not stop abusing drugs and wants to change her life. As they are ready to leave the city, the neighbourhood dealer who had recovered from his serious beating attacks Michael, killing him. We hear the words of Tim as Michael dies, “the sky is not falling…the sky is not falling.”

As difficult as it was to watch, this film left me thinking for days afterward. Although René had a limited role in the film, he had some of the best lines. I especially liked the comment to Michael, leaving the café, “you should have been an actor.” For anyone who frequents video rental shops that carry indie films, I think this one is worth trying to find.