Hugh and the Train

A railway reading of Images

I still vividly remember the first time I watched Images, my excitement over how mysterious the story was, and how it was a challenge to understand and follow its meaning. That is, until the scene when René’s character, Hugh, takes the train. I, who have studied fictional railways (and sometimes even real ones) knew that this meant something very particular, because even the most “innovative” movie or fiction cannot escape at least one cliché; it can’t remain too mysterious too long.

What better cliché than using the railway! The presence of the railway in Images allows me to show you how the link between Hugh and the train is actually a clue to understanding the movie. But most importantly, it will show you that René played a very special character in the film: the train itself. (All right, maybe he didn’t really play the part of the train, but both the train and Hugh become one at the end of the movie, as you’ll read in the last part of this [almost] serious study.)

A matter of identity

For those who have never seen Images, or saw it but don’t remember the story, allow me to summarize. It’s the story of a writer, Cathryn, who is dealing with the men in her life. However, this simple plot doesn’t reflect the intriguing scheme of Images. Because Cathryn also has to deal with her confused mind and, since the entire story is told from her point of view, it’s a continuous journey between reality and fantasy.

The fact that identity is important now makes more sense because we have to look through Cathryn’s mind to see who Hugh is and we will use images to do so. At the simplest level, Hugh is Cathryn’s husband. He is also a representation of a steady reality…. or so it seems at the beginning of the movie. He is a witness to his wife’s distress and, even though he can’t understand it, he tries to help her. His actions are rational; he uses the real world to deal with Cathryn’s sudden crisis. His steadiness demonstrates a contrast between him and his wife but, instead of increasing during the movie, this contrast fades as, little by little, he is trapped into Cathryn’s world, until he cannot escape. However, this change is introduced at the beginning of the movie, when Hugh comes home and the images presented give us a few more clues that will be understood and explained all in good time. 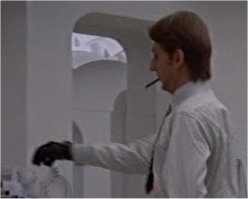 Hugh in his gloves

First, Hugh comes home in his car and takes care of his wife’s car. You may not see this as relevant, but wait. Why doesn’t he take off his gloves right after he comes home? I don’t know about you, but when I come home I usually take off my coat and gloves right away, even if I like them very much. You’ll probably answer that perhaps he forgot about them. Poor excuse! Here is a better reason: they are a reminder of his real life. When he finally takes them off, he enters his wife’s world. And is it a coincidence that she has a crisis right after that? Another image is the cigar. You won’t need to hold your breath too long for this explanation. The cigar announces the train. That’s the other evidence of an identity matter. The objects suggest that Hugh could hide something about himself, yet he himself doesn’t know what he’s hiding. But we know that what he is hiding is his link to the railway. Picture a steam engine. How is it usually described in literature? By fire, water, and smoke. Isn’t the cigar about fire and smoke? Also, isn’t the bathroom–where one can find water mostly–an important room in Images?

Now you have the clues. A woman living in her own world, her husband trapped between two worlds, and a train that will appear soon enough.

As stated before, Hugh travels from one world to another, from his work to his home, from his reality to his wife’s fantasy. But once he joins her on her journey to the country house, he gives up one world, his, for good (even if he doesn’t realize it yet). In fact, everything makes us believe that he is in control. He drives his wife’s car while she is asleep. In fact, he is just a tool that needs to be deceived in order to create a little more confusion. Which leads us to our next question: what if the two worlds aren’t what they seemed to be at first? What if the whole story was about a space of life and death, two states that are closely linked yet separated? Then, we would have to assume that Hugh is a part of the living world, while Cathryn has a key to enter the world of death. For example, throughout the story she keeps seeing her dead lover, Marcel, who was killed in a plane crash.

Hugh in the mirror

Not only can she enter the world of the dead but she can also take people with her: in this case, her husband. One scene in particular illustrates what is going on at the country house. Hugh is in the bedroom, sitting in front of a mirror. His face appears three times, and this has two meanings. The first is that each face represents the three men of Cathryn’s life: René (another former lover), Marcel, and the most important one, Hugh. The second meaning of this image shows the different worlds: the living world, the dead world, and the junction between the two of them, which is where Hugh seems to be while he is at the country house. It’s a space between the worlds where the characters’ state is not really known. The living one (Hugh) lives, but the dead lover, Marcel, appears to be living as well. Only Cathryn has the power to decide who will live and who will die.

When Hugh decides to leave for a while because of his work, this could also be interpreted as an attempt to escape. At that point, since Cathryn allows it, we may suppose that he is going back to the living world. But as soon as we learn that he will take the train, there is no more doubt about his fate. He won’t be able to escape; he will reach the other world.

Call it a railway story

Now it is time to enter the realm of serious stuff. Scholars proved that the railway can be a very particular space, a junction between two worlds, all because of what the train in the 19th century was: the symbol of progress. Since then, other modes of transportation, the car and the plane, have become more important…. but wait! Don’t we have those two in Images as well? Yes, of course. One character has been killed in a plane crash (Marcel), another is seen mostly in his car (René) and Hugh, well, he travels by train.

If you’re not lost yet, let’s get closer to the train. When Hugh leaves, his short goodbye to his wife takes place outside the station; then we see the train leaving as if the station didn’t even exist. All that we see is Hugh entering the station, then the train leaves, as if in fact Hugh, by entering the station, entered the train. (Another clue: the letters above the station. Read them fast and you’ll see “DIE.” Scary? Rather predictable….) The station is not the important place here, it is the car and the train. The audience must get the feeling that Hugh leaves the car to go directly onto the train; metaphorically, he jumps from one world to another.

As soon as the train leaves, we know that something is going on, the same way something is going on when Charles Dickens’ character in “Barbox Brother & Co.” (published in All the Year Round, in the special issue for Christmas 1866 called Mugby Junction) stops at Mugby, a place that has quite interesting similarities to the country village in Images. There is one main difference, however, because Images allows us to discover what has happened to the characters. Hugh takes the train back from the city and Cathryn is willing to pick him up at the station, but she misses him and leaves.

At this point, we can either believe that he missed his train, or that he remained in the train to reach another world. However, the end of the movie gives us two possible explanations. The obvious one: Hugh is killed by Cathryn on his way back from the station. Another explanation that best suits a railway (ghost) story: back in Hugh’s reality, we see him dead at the bottom of the waterfall. He may be dead for the “real world” but you and I know that he still is on a train. How? Think of the waterfall. Water, smoke. Now the dead man is bleeding. Blood. Red as fire, blood could be defined as a man’s fire. Remember what we said about the cigar? That it is an illustration of the train? Well, the waterfall is also an echo of the train. The waterfall becomes a metaphor of the train; therefore, metaphorically, Hugh is still a passenger on the train. Hugh’s surroundings show a constant presence of a railway environment and it’s not surprising that his state of death for the living occurs while his wife is driving a car. He was on his way to the country house and still may be. Not in the real world but in another one….

I still vividly remember the first time I watched Images. I was working on an essay about railways, it was very late at night, and I needed a break that lasted until the movie was finished. There was something unforgettable about this movie. Was it the story? The characters? Or simply the echo of the train fooling the audience, making us all believe that Cathryn was the only one to be blamed when finally it’s all about a war between different means of transportation: car, plane, or train. Which one should be the symbol of progress? Neither one nor the other, says Images. Because, in the end, the only one to make that distinction is the Man who has his fate in his hands.