From the moment René Auberjonois added an Irish lilt to his reading of “Christmas Morning,” by Frank O’Connor, we were all leaning forward, waiting for his next descriptive phrase.

“Christmas Morning” is the funny yet poignant story of Larry, who tells us in first person at the age of 12 what one Christmas would mean to him. At once, we learn through René’s Larry that he has a younger brother, a suck-up to Mom who is very good at spelling and school in general, and that Larry is more of a typical mischievous kid who roams with the wrong crowd and forgets to do his homework.

A few days before Christmas, it occurs to Larry that he may not get anything from Santa Claus if he continues with skipping school and other activities, and so he tries to be good. Failing miserably at this, he’s determined to stay up past midnight, confront the man in red, and explain to him what he’s really all about. All in the hopes of getting a good present. In the meantime, however, we see in the background a worried mother who is trying to scrape together a nice Christmas for her sons, and who is also trying to persuade Larry to mend his ways and not end up like his father. 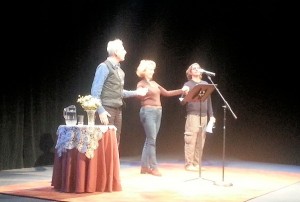 Rene and cast for Selected Shorts

Since René would only be at Berkeley Rep for the one day, reading along with two other actors, Kate Burton and Michael Imperioli, I was determined to be there. Selected Shorts is all about an individual actor reading a short story to us, radio-style, and so little rehearsal was needed. However, I mistakenly booked a Hanukkah party, and, worse than that, I was the host at the party and it was at my house. For some reason, my guests expected me to be there.

With the okay of my play mate, Dawn, I quickly changed our 7:00 p.m. performance to the 2:00 p.m. matinee, and was determined to leave at the intermission so that I could make it home before any guests showed up. Thankfully, I read in the program as I took my seat in the Thrust Stage at Berkeley Rep that René was to perform first.

I did get to see Kate Burton read “Live Wires,” by Thomas Beller, which was an interesting Hanukkah story, but I’m sorry that I missed Michael Imperioli’s reading of “Jamaica” (by David Schickler). I had been anxious to see him since Life on Mars and, of course, those Tequila commercials. Dawn tells me that Imperioli was fine, as was Burton, but that René was the best, both in story and reading. I have no doubt that she is right.

As a long-standing fan of Star Trek: Deep Space Nine, I was ecstatic to hear that René Auberjonois would be one of the readers at the December 9 performance of Selected Shorts, a program of short fiction read by popular actors and actresses. I am an avid listener of public radio, and Selected Shorts has always entertained me, introducing me to short works of fiction I might have never heard otherwise. Seeing it in person was sure to be a treat, especially in a venue as intimate as Berkeley Repertory Theatre’s Thrust Stage.

René opened with Frank O’Connor’s “Christmas Morning”, a story about a young Irish boy’s less-than-upstanding holiday capers. This was easily my favorite of the three performances, and not only because of the reader’s renown. Since I often struggled as a child to meet my parents’ expectations, I saw a bit of myself in the story of a boy attempting to make his case to Santa Claus in all the wrong ways. “I decided there was really only one thing for me to do, and that was see Santa Claus and have a talk with him myself,” René read in a spirited Irish brogue. “Being a man, he’d probably understand that a fellow wouldn’t want to spend his whole life over old books, as the mother wanted me to. I was a good-looking kid, and when I liked, I had a way with me.” René’s energetic performance, filled with gesturing and yelling, incited laughter among the audience, and yet he was also quiet and somber when appropriate, leaving us to consider his, and the author’s, words. It felt as though he was telling us a story from his own childhood rather than reading a text written by someone else.

Kate Burton then read Thomas Beller’s “Live Wires”, a tale of a son and his mother, their annual Hanukkah party, and his anxiety about how his new girlfriend will be received by their guests and family. The last piece was David Schickler’s “Jamaica”, performed by Michael Imperioli, which uses the common plot device of a-dad-with-his-head-stuck-in-the-stairway-railing to launch a meditation on family, fatherhood, and love. 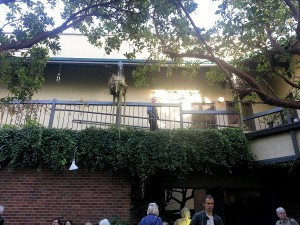 René on “the Promenade”

During the intermission I caught a glimpse of René striding across the theater’s upper walkway in such a familiar way that I felt compelled to snap a picture. I half-expected him to walk up to Nog and Jake and gruffly pronounce, “No loitering on the promenade, move along gentlemen.” Figuring that this would be the limit of our interaction, I was startled when René and I crossed paths outside the theater. Not knowing what to say, I blurted out how much I loved Deep Space Nine and his contributions to the series. Without missing a beat, René graciously smiled, thanked me, and allowed my date to snap a picture of the two of us.

All in all, I thoroughly enjoyed Selected Shorts. I discovered a few new writers, saw professionals at the top of their craft, and was able to shake hands with a man whose work I have enjoyed for decades. Thank you, René, for a fantastic performance and a wonderful memory!