Picture a bleak, lonely stage and a solo figure in black – wearing a Gates McFadden mask – tap-dancing casually in the spotlight. After a few classy turns she removes the mask to reveal she is, after all, Gates McFadden. That sets a perfect note of whimsy and audience participation for the evening of “Krusher Does Krusher: A Deconstruction of the Iconic” at the Actor’s Gang in Los Angeles on “2.11.15,” starring Wil Wheaton, John de Lancie, and many more super-talents. 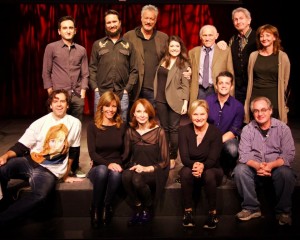 Cast of Krusher Does Krusher

The first piece with Armin Shimerman as a shy professor being psychologically forced to fertilize McFadden’s newly-laid eggs brought down the house and made you wonder where they could possibly go from there, but onward they went for one of the funniest evenings of freshly-written Star Trek-related pieces you could imagine, combined with selections of music, video projections of new art, and photography.

My personal favorite: René Auberjonois reading (in character) a fan letter to Gates written by a little old lady from the South, imploring her to accept the Lord as her Savior. There’s no way I can explain the hilarity of that if you’ve only known René Auberjonois as Odo. I was literally on the floor, gasping for air. 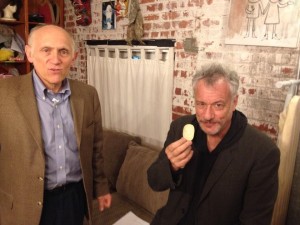 And that’s a big problem about “reader’s theatre”. Most people see the term, think of actors standing onstage with little or no help from costume, make-up, special lighting, set design, or sound effects and think, “Boring!” People, you are so wrong. Here is where you get a chance to see your favorite actors display their real talents. To see them make characters come alive under these conditions is nothing short of amazing. And the choice between seeing them on any kind of filmed media and having the chance to see them perform onstage is no choice at all.

I’ve been watching René perform live (in San Francisco) since the late 1960s and let me tell you something about him and Armin Shimerman (Odo and Quark); you have NO idea how extremely talented these people are unless you’ve seen them in front of a live audience. The same goes for every performer in this production. (Wil Wheaton, with a beard, wearing a wig, playing Deanna Troi… get the picture?)

If you are fans of these performers, take any chance you get to see them perform live when they appear in your area.