Bored to Death: “Two Large Pearls and a Bar of Gold”
Criminal Minds: “Self Fulfilling Prophecy”

In fall 2011, René guest starred on two TV series, and his episodes happened to air within three weeks of each other: Bored to Death on HBO in November, followed by Criminal Minds at the beginning of December.

Anyone familiar with René’s career knows he has made guest appearances on a lot of TV shows over the years. And because of the nature of series television, any guest character tends to fall into a limited number of categories. This is a logical consequence of the nature of stories and storytelling. The recurring characters in a series are, generally speaking, the heroes of the ongoing story. They’re the characters that the audience is expected to admire, identify with, and root for. These heroes have flaws-defects in their personalities, moral weaknesses, or other obstacles that prevent them from being completely fulfilled and happy-because often part of what drives a story narrative, and provides dramatic conflict and excitement for the audience, is the “hero’s journey” (as famously described by Joseph Campbell) toward one or more life goals: maturity, safety, prosperity, love, and so on.

On rare occasions, the central character in a TV show (or book or play or film) is so damaged, so dangerous, that it hardly makes sense to call him a “hero” in the usual definition of the word. Instead, they’re “anti-heroes.” Seen in a different context, the central characters of Dexter, House, and Breaking Bad, and certainly Professor Snape from the Harry Potter books, would fall into the category of villain, not hero.

But in most cases, putting it in its simplest terms, the heroes of a TV show are usually the good guys, and many if not most of the conflicts and dangers they have to triumph over from week to week are caused by a never-ending parade of bad guys. And unless a particular series has a recurring villain – like Superman’s Lex Luthor – the role of bad guy of the week is given to a guest star. Like René.

Not all guest roles are villains, of course. Medical dramas need guest stars to play patients struck by the disease of the week and their family members. Crime dramas and legal dramas need victims and witnesses, as well as colleagues and competitors and old friends and former lovers of the main characters, any of whom can serve as the central cause of some sort of trouble. René’s character on Warehouse 13, “Hugo Miller”, falls into this category of a guest who’s not really a “bad guy”. In his first story, Hugo, a friend and colleague to regular series character “Artie,” is a victim who needs to be rescued, and in his second story he works side by side with the regular cast to solve a mystery, gets in trouble in the process, and also fuels additional dramatic conflict by appearing to be a rival for the affections of a woman Artie loves.

In contrast, in René’s two most recent guest star appearances, his character was definitely the villain of the story – but, because of the fundamental differences between the two shows, the villainy of René’s characters took very different forms.

Bored to Death is the comedy series about Jonathan, an “unofficial private detective,” and his two best friends, George and Ray. All three main characters are well-meaning but decidedly flawed people: childish, self-centered, socially clueless, and frequently just plain inept.

In “Two Large Pearls and a Bar of Gold,” one of Jonathan’s former girlfriends, Patti, is getting married, and her father Henry (René) hires Jonathan to guard a necklace, which is a valuable family heirloom, during the night before the wedding. 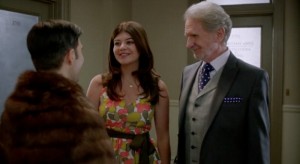 In his first couple of appearances, Henry is clearly a sane and sober gentleman, doubtful of Jonathan’s qualifications as a detective but so fond of his daughter that he’ll put aside his own misgivings and hire Jonathan for the job because that’s what his daughter wants.

Sure enough, a ski-mask-wearing thief comes after the necklace that night and, after a brief exchange of swordplay between Jonathan and the thief and some clumsy attempts at “assistance” from Ray and George, the thief dashes off with the jewels.

The three friends go to report the theft to Henry, who answers the door of his hotel room wearing a white bathrobe and warning them to keep their voices down, because Patti’s mother is sleeping in the next room. Henry expresses outrage at news of the theft…until George points out that he seems to have a red pen leaking in the pocket of his robe, and Jonathan realizes it’s not ink, but blood, coming from the same spot where he’d managed to poke the thief with his sword. He accuses Henry of stealing his own necklace, and Henry admits his guilt, explaining that he needs the insurance money in order to pay for the lavish wedding Patti desired. Jonathan chooses not to report Henry’s insurance fraud scheme because, after all, he was acting out of love for his family.

Thus, in Bored to Death, although René’s character is a traditional bad guy – a thief and a swindler – he’s on the inept, mostly-harmless end of the villainy spectrum, an appropriate antagonist to the show’s well-intentioned but inept protagonists.

Criminal Minds is a dramatic series about a team of crime-fighters who specialize in identifying and stopping serial killers. The regular characters are serious people doing serious work: law enforcement professionals and experts in criminal psychological profiling, crime scene forensics, and information-gathering and analysis.

In “Self-Fulfilling Prophecy,” the team is called to investigate what seems to be a case of mass suicide at a military academy for boys, by a group of the older cadets who were on an assignment that consisted of camping, on their own, in the woods. Two odd facts immediately attract the attention of the team. First, a single, younger boy seems to have committed suicide in his barracks a week before the group in the woods met their deaths. Second, one of the boys from the camping group is not among the corpses found in the woods. Did he decide, at the last minute, to back out of the group’s pact to kill themselves? Or could he have killed all the others, including the younger boy a week earlier? 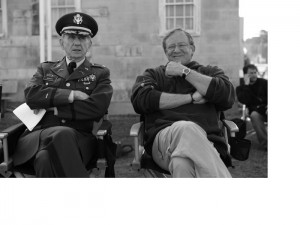 Colonel Massey (René), the headmaster of the academy, tells the team that they’ll have his full cooperation as they investigate the circumstances surrounding the deaths, and states that his priorities are protecting the well-being of the rest of “his boys”…and breaking the tragic news to the parents of the boys who have died. His demeanor is stern and unemotional which, at first, appears to be an iron-hard determination to suppress personal grief.

However, as the story progresses, the team members become convinced that Massey is hiding something and that, instead of helping them, he’s hindering their efforts. Although the school’s official policy states that they don’t engage in corporeal punishment, interviews with some of the cadets, and examination of the corpses of the dead boys, suggest otherwise. Also, the missing boy begins to look less like the sort of dangerous loner who might become a serial killer and more like a young man with a habit of defying authority. And Massey, it becomes clear, is not a man who accepts defiance of his authority in any form.

Massey’s hard, cold demeanor becomes more and more frightening as the episode progresses. For me, the pivotal moment comes in a flashback scene, when Massey walks in on a couple of older boys fighting while, behind them, a younger boy is being punished by being trapped in the rotating drum of a clothes dryer. For just a moment, as Massey takes in the scene, the merest hint of a smile flickers on his lips, then vanishes again. 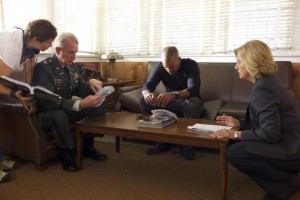 On set, discussing the script

In the end, it turns out that this academy, far from being a model school for producing young men of upstanding character, has relied for years on a system based on intimidation and bullying, with Massey not simply ignoring but actively encouraging older boys who terrorized the younger cadets. The team finds enough evidence to prove that Massey arranged the deaths of the boys in the woods with the intention of framing the missing boy (who is found, safe) for the crime, and arrest Massey and take him away.

René has played many different guest bad guys on many different shows and, shapeshifter that he is, always adapts his performance to fit the style of each particular story. But though he has been cast as a variety of thieves, cheats, con men, murderers, supernatural demons, and even a pedophile priest, I have to say that Colonel Massey struck me as the most purely evil character René has played. It was a chillingly effective performance!

Photos courtesy of websites of Criminal Minds and Bored to Death