(Note from Suzanne: Carolin and I attended the “Evening with René Auberjonois” in Deggendorf together. Carolin has written a very complete report, but since I was there with her, I’ll add my voice and just comment and react to what she wrote!)

Somehow I can’t believe that the event in Deggendorf really happened. I would never have thought that it would be so good. Actually I was a bit skeptical at first because Deggendorf is a small town in the middle of nowhere, right next to the Bavarian Forest — a rather beautiful national park near the Czech border. (As for me, all I knew was that Deggendorf was far far away, lost in the Forest, and the event itself seemed to be something different from those huge conventions gathering hundreds of people. It was an occasion to get some driving experience, meet with Carolin, René, and Judith, and see what a small German convention was like.)

My trip to Deggendorf was fine. Surprisingly enough my plane from London Heathrow arrived on time! I caught a bus to Freising, then took the train to Plattling and then another train to Deggendorf. Suzanne, who drove over all the way from France, got caught in a bad traffic jam so she arrived only a very short time before I did. (The traffic-jam was entertaining enough. People would stop their cars and picnic on the motorway. Some were trying to guess where I was from. The six-hour drive finally turned out to be a nine-hour drive and the traffic jam allowed me to rest before the long evening.) She met me at the train station and we walked back to the hotel. I thought: “Boy, what a boring town this Deggendorf is! Completely out in the sticks!” (Depends on your perspective! Deggendorf is lost in nature but seems to be the kind of place you look for if you want a quiet, or romantic, week end.)

There is only one train line leading to Bayerisch Eisenstein — from Plattling. Exciting! We were looking for a cafe or some place where we could have a coffee and cake — a typical German pastime — but couldn’t find anything at all. This is kind of rare in a Bavarian town. The town centre must be hidden away somewhere, far away from the hotel. So we went on to the hotel, checked in, and then left to get a few things from the one shop that was open on a Saturday afternoon — ALDI. Just as we were leaving the hotel we met René and Judith, who had just arrived. They looked rather exhausted. René said that they had just driven up from Freising — that’s near Munich airport. He seemed very happy to see us. I also said hello to Judith and introduced myself. Then René and Judith went to get some rest before the event and Suzanne and I went to buy a few things to eat. Needless to say I didn’t eat much because I was nervous about the interview I was to do with René before the event. (And by nervous, she means anxious, like in almost shaking and checking her device to record the interview a thousand times!) 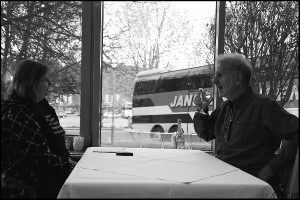 When we went down for the interview there was nobody there. I went to the room where the event was supposed to happen and people were already taking their seats. Nobody knew anything about the interview. I went back and forth between the restaurant and the conference room until I saw René with Filip, the organizer of the event, and stopped them. We all went to the restaurant, but now Suzanne was missing. René’s assistant Manuela went to fetch her while we were directed to a place near a big window that was supposed to be great for photos (though it wasn’t…really). Then Suzanne appeared and we started. It went really well and I found it very enjoyable. (You can read the interview here) Suzanne and Marguerite had dared me to wear my Goth clothes (black hoodie with silver barbed wire and Poe t-shirt) and I agreed to do it because it was close to Halloween anyway, which explains my strange outfit on the interview photo.

(My version of the story is that I was waiting for Carolin at the entrance of the event and suddenly, she had vanished. In the end, the organisers made an announcement to find me, and Manuela escorted me to the restaurant. Carolin had started the interview and, well…this was anything but a good spot to take pictures. I couldn’t really disrupt the ongoing interview so, as we say, “I did my best”– and yes I’m quite pleased with the result! Later that evening, Manuela and I realised that we knew each other as we had met already at STICCON this year!) 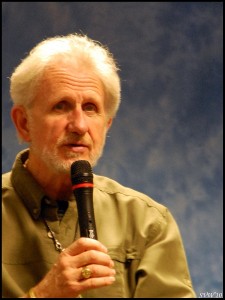 After the interview, René had about ten minutes left before the talk started. He entered on his knees — to everyone’s surprise and delight — and then talked about himself for a bit. Afterwards he invited everyone to ask questions. Most of the questions were rather unusual. Only a few of them were related to Star Trek. One fan wanted to know whether René was feared as a tyrannical director while directing several of the DS9 episodes. René replied that he was anything but a tyrannical director. Quite the contrary, he was tyrannised by the actors. He recalled that he ended up almost begging Alexander Siddig to follow certain cues so that he could finally wrap up a scene. There was also one question regarding what it was like to work with William Shatner on Boston Legal. René explained that he had expected Shatner to have a very big ego because of his reputation but found him to be very different, very interested in people. Actually he found James Spader a bit disconcerting at first, but then learned that he was just very meticulous and serious about his work, and then everything was great. One fan told René that he was a musician and wondered if René thought that acting was comparable to playing a musical instrument. Of course René saw the similarity! Suddenly Judith entered the room. René was completely surprised because she had never done that before. Later, when somebody wanted to know whether he had a private relationship with Nana Visitor, René asked Judith if he did. That was really funny. He then explained that he liked Nana but that he never really saw her apart from occasional meetings at conventions. They were just colleagues. It all went well and René seemed quite happy with his audience and their questions. At one point, he said that he regretted two things in this life: First, he had never learned a foreign language properly and second, he never learned how to play a musical instrument. The talk was followed by a photo shoot. I took advantage of it because it was included in my ticket and it turned out to be a really good photo — after I had messed up two other attempts to the photographer’s chagrin! René was very patient though. 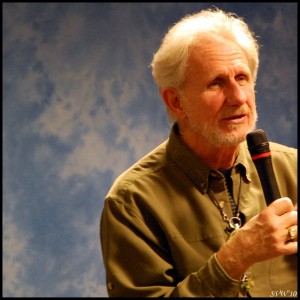 After the photo shoot there was a raffle. René was asked to dress up as a lucky fairy and draw the winners. His costume consisted of a pair of wings, some sort of wand and a crown and it looked all right, but I don’t think he was very comfortable with the whole thing. Several sponsors had donated posters, t-shirts, and other items. Neither Suzanne nor I won anything. Then René did the autograph session and Suzanne and I sold drawings for Médicins sans Frontieres while René started signing photographs. We were quite successful. Almost everybody who queued up for an autograph also bought a drawing. I am sure this was partly due to Suzanne hypnotising half of the fans and then telling them they desperately wanted a drawing! René was very busy indeed drawing buckets. Then he packed up and went upstairs while we proceeded to our expensive buffet. Most of the food was gone already. Great! But then René came down again to mingle with the fans and he sat with Suzanne, Manuela, and me a lot of the time, nursing a non-alcoholic beer. The three of us had Spezi — a Bavarian drink (Coca-Cola or Pepsi mixed with orange lemonade). At about 10:20 p.m., René said good night. We sat and talked until way after midnight.

On the next day, Suzanne and I got up extra early to catch René and Judith at breakfast. They came down round 9:30 and we sat with them until they left for Munich airport to meet an Italian friend. It was wonderful! René told me that Filip had gone 180 km/hour (112.5 mph) when driving him and Judith to the hotel. He was a bit nervous and it did not help when Filip started checking his texts on his cell phone while driving. When René questioned him about it Filip told him not to worry — he wasn’t writing messages, just reading them! This would have made me uneasy, too, and I am German. Germans love to drive fast. Politicians have been trying to introduce a speed limit on autobahns for years but this is not going to happen. There would be a revolution — and the automobile industry would not stand for it. (On the other hand, since everybody is driving fast there, you have no choice but drive fast yourself, otherwise you’re a serious danger to everybody else. But I find German drivers much more respectful than French drivers, who just believe that they are alone on the road….)

It was a very nice event, well organised. Filip explained that he was thinking of holding the event in Munich but this wasn’t really possible because the rent, accommodations and food — anything, really — would be too expensive. It is not a bad idea to hold the event at a place like Deggendorf. There is a direct train from Munich to Plattling and usually the connecting train is waiting when you arrive to take you directly to Deggendorf. It was a more intimate event, with only about 70 people, and after attending DragonCon this year (over 35,000 people), I just loved that. René also appreciated it, after having spent nine days on a small boat with 3,000 rowdy people — only a few of them being Trekkies.