FedCon has always been a pretty exciting event for me. Not only because there are many guest stars present–people whom you have admired for years in their roles, be it on spaceships, in uniforms, as villains, or special effects experts–but because adding to this there is always a special “breed” of fans getting together, who with devotion and much creativity adore/live/work for their fandom.

For me it is fascinating to see all the imagination and love for detail whenever fans create costumes or build scenes. Especially, as happened this year, when an AT-AT walker passed by, followed by an army of stormtroopers, including a snow monster. (FedCon has not been limited to Star Trek for a long time now).

However, a genuine experience this year was the Meet and Greet with René Auberjonois. I must admit that in Star Trek: Deep Space Nine he had never been one of my favourites, and I could well have done without Odo. But I simply think René’s fabulous as Paul Lewiston, and I regret very much that he does not belong to the Boston Legal cast any more. In earlier times I would not have attended FedCon to see René Auberjonois, not even the panel would have interested me, but now there was a chance to talk to Paul Lewiston for the last time. At least, that was my personal agenda. Something like the “goodbye tour” of Crane Poole & Schmidt’s eminence grise.

On the morning of our meeting, René had to start the panels. Having been to conventions before, I know that this is not necessarily the easiest task. Many of the fans celebrate with the actors in the evenings, get to bed late, and are tired the next morning or don’t show up until noon. Accordingly, the audience is slow/inactive, and this mood is easily passed on to the actor on stage. Thus, I assumed René’s talk would not be much different and prepared myself for a boring panel—it would be mainly about Odo, anyways.

One should never judge a book by its cover, and an actor never by his role, but who can really do that 100%? Thus, I had certain expectations, which all were not met…

And that is a good thing!

I have rarely seen an actor who is as close to the audience and as authentic as Auberjonois. It’s a little bit like listening to a storyteller who wants to pass on wisdom and experience of life to his grandchildren. And at the same time he is a cool and funny guy, who you would invite to a BBQ. He is refreshingly honest and can laugh at himself. 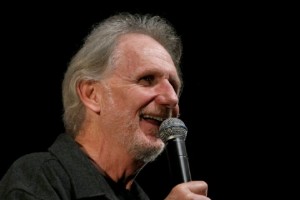 I was impressed with how outspoken he was about the decisions in his journey through life and his acting career. Why he did not continue doing M*A*S*H as a series and chose movies instead. The difference between stage and TV for him personally. His friendship with Robert Altman. He decided to make money and thus chose in favor of television productions, because he had to support a family, and that was not possible or simply too uncertain on stage. I had to laugh when he talked about his house. The one “Star Trek built”.

René is very human and down-to-earth. I liked the stories about his family—he was about to become a grandfather once more and naturally looked forward to it. I could picture him with his grandchildren very well. Helping to conjure that image was, above all, a question from the public, asked by a boy who could not have been older than twelve, and who must have summoned all his courage to ask about Auberjonois’s favourite DS9 episode. (Actors usually do not like such questions particularly… you ask me about my favourite day at work, I would not know what to answer, either)

René, however, concentrated for a moment, and then explained to the young man that he simply did not have an answer. He explained that DS9 is a huge and complex story, evolving with each episode. And each of them has its own charm. And as if he knew that this was a very unsatisfactory answer for a child, he added: “Do you have brothers and sisters? What if you would go to your parents and ask them, who is their favourite child? They would tell you that they love you all alike. And it is like this with DS9.” Admittedly, my mouth was agape a little, and in that moment I became a fan of René Auberjonois.

I could have listened to him for hours. This feeling continued later on at the Meet and Greet. What started as easy chitchat turned into an exciting narration.

René talked about the election campaign in the USA, and that he hoped that with the next president some changes would start in his homeland. In this context he told us about his father, who literally lived the American dream, and who fell victim to the McCarthy witch-hunts-—which broke his heart. René is still very much moved by this.

Apart from serious topics, he told us about his activities as an artist—he builds large sculptures made of metal —and that he will be on stage soon. In July he’ll play The Imaginary Invalid in Washington D.C. The director had asked him to let his hair grow, and now René did not know if he could fulfill this wish, since he might be called in once again to play Paul Lewiston, and Paul with long hair would be pretty unusual.

Before we knew it, the hour with René had passed. We didn’t ask many questions, because we all hung on his words, and simply enjoyed just letting him talk.

I didn’t mind a bit that we did not ask much. I was happy my expectations were not met, and that I could get such a large glimpse at the personality that is René Auberjonois. He is the cool teller of tales, with whom I would gladly sit at the campfire and philosophize about the world.