by Florian Kopp and Carolin Kopplin

First off, I have to declare that Destination Star Trek has been my very first convention.

The Star Trek universe and its famous actors have always appeared to be beyond my reach, which is why I was so very excited to be given the chance to see my childhood heroes right on the spot. It is not an over-exaggeration, when I admit that this was one of the most precious experiences so far. The actors offered photo opportunities along with signing sessions, during which all of them were very kindly and sympathetic. In addition, I was able to view a variety of stage shows, including the one of René, Armin Shimerman, Jeffrey Combs, and Casey Biggs.

However, the reception was so overwhelming, that I found myself at the very end of the waiting line. Suddenly, the fear caught hold of me that I might not be able to see the show at all. As the admission progressed, and as I was finally able to enter the hall, I saw that basically all seats were already taken.

All seats, except for one, which was to my surprise located within the second row from the front.

I took advantage of the situation and approached one of the kind employees, asking whether I could take this very seat. Luckily the employee agreed right away, even though the front-row seats are usually reserved for dedicated fans who are able to buy those expensive tickets. 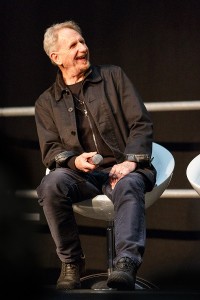 This is how it came to be that I got the chance to sit in the second-from-front row: a spot from which I could take some great pictures of René and his fellow actors.

The show itself was very entertaining, and the crowd had lots of fun.

I was especially impressed by one notion of René, when he claimed that it is we, the fans, who are the air an actor needs to breathe to be able to follow his profession.

He said we are supposed to write to him, because his desk is rather empty and that he would be glad to hear from us, which is why I wrote this little story.

As much as Star Trek and its portrayal of a desirable future may be Science Fiction it is a matter of fact, that its talented actors are very real. They are not beyond a fan’s reach, which is what made this day so special to me.

I would like to thank René and all others involved, for putting so much effort into this convention, to create many precious moments that will never be forgotten.

I was not too enthusiastic about going to the Destination Star Trek Frankfurt event after my experiences at the DST London convention in October 2012. However, I was anxious to see René and Brent and I could combine going to Frankfurt with visiting my old friends in Heidelberg so I decided to go.

The con did not seem very big. There were a couple of stalls where you could buy merchandise or photos for your autographs–the actors were not allowed to bring any–as well as some overpriced food stalls. There was also an interesting exhibition showing part of the collection by the greatest collector of Star Trek items in the world. He had also brought some of Odo’s masks, which I really enjoyed.

I went to see René and Brent first. René was not selling any DWB drawings yet but I didn’t ask about it because I thought it was Friday and maybe he would start on Saturday. It never happened though, which is sad, because I’m sure a lot of the fans would have liked to buy one of René’s unique drawings. Brent’s line was very long so I went to Armin Shimerman instead and talked to him for a bit. Armin is involved in Antaeus Theater and I’m a dramaturg so we had a lot to talk about. Of course there were people waiting for Armin, too, so our time was limited, but it was good to chat with him. Finally, I got into Brent’s queue and it was great to see him. 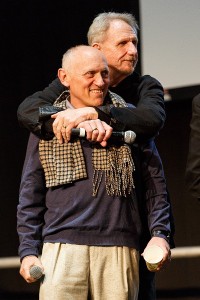 The next day was Saturday, which is always the busiest day. I attended Brent’s talk, which was 15 euros, and that was a lot of fun. Brent pretended not to know any English as soon as an English-speaking fan asked him a question. He spoke a few words of German, too, which delighted the German fans–and some Dutch, which the Dutch fans loved. Armin stopped by and they teased each other for a bit. One German fan wouldn’t tell Brent his name so Brent just found a name for him and kept calling him that. I think everybody had a ball at Brent’s talk.

The Deep Space Nine talk was free and therefore very busy. I just about made it in and stood in the back. The talk consisted of the British moderator, René, Armin, Casey Biggs, and Jeffrey Coombs. The actors were welcomed with euphoric applause. The first question that I got to note down concerned the atmosphere at Deep Space Nine: Did the actors consider filming the series good times or bad times? Armin stated that there were no good times. René advised us not to listen to him. Casey Biggs claimed that he had a wonderful time. René said: “I think, you (the fan) really meant what was our favourite episode. To me, it was one big episode, all flowing together.” 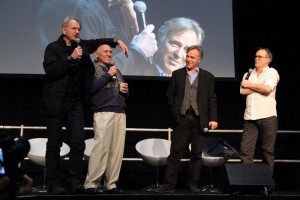 The next question concerned their worst moment on the show. Armin jumped at the question: “Whose idea was it to make Quark a female? What did you do with that episode? The costume was very voluptuous.” Casey Biggs started snoring. René commented that he’d talked enough. Casey Biggs woke up and said that his worst moment was when the writers decided to turn his character into an alcoholic. The alcohol was replaced by corn syrup–a disgusting experience.

René noted that he was passing by earlier when Michael Dorn and Gates McFadden were doing a talk: “Michael was singing a song and said Deep Space Nine was very serious and The Next Generation was fun.” René said: “I liked that it was serious on the set. When you work for seven years it gets very intense, like family. The writers know you, they work for you. They know what your instrument can do.” Casey Biggs added: “There are probably 100 people on the sound stage. You are hired as a professional. Millions of dollars are spent. If you don’t do your job properly you’re not gonna be there very long.” 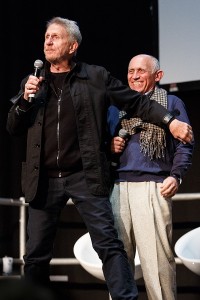 The next question came from a Danish fan: “How do you handle the fans and the fans’ relations with you? When they cross the barriers–they feel like they know you?” Armin said: “I’ll go first,” but Casey Biggs was the first to reply: “The fans spend a lot of money to come here. They deserve respect. Some become too familiar.” Armin jumped in: “Some people overstep the boundaries and you have to say that’s enough. But our show makes a difference and we appreciate their love for our work.” René added that there was a difference between your work on stage and in front of the camera. On stage you get oxygen from the audience: “It’s a very rare relationship that we get to meet our fans. We finished the show so long ago and you are still giving me oxygen.” Casey Biggs agreed: “Fifty years from now there won’t be ER or Friends but there will still be Star Trek. What the show stands for continues.” Jeffrey Coombs confirmed: “Wherever we go we have a room with enthusiastic fans. We appreciate that.” A fan commented: “I grew up with DS9 and I think the actors changed for the better.” Casey Biggs teased Jeffrey Coombs: “Once a traitor always a traitor.” He added that the writers created journeys for the actors. He had an Othello/Iago relationship with Jeff Coombs. Armin explained that they were extremely blessed with the supporting actors on the show. René mentioned Andy Robinson and Marc Alaimo. Armin continued: “What other Star Trek shows can do that? Because of that our show was the strongest of the shows because of such a strong supporting cast.” The actors left to thunderous applause.

I thought the next day, Sunday, would be a bit quieter but that was wishful thinking. I went to Brent’s second talk which was quite early, at 10 a.m. This time René stopped by but he didn’t say anything, he just pretended that he couldn’t find his way out of the room, which got a lot of laughs. An ongoing joke about René was that his name now was “Oldo” and René played up to that joke.

In the afternoon, I talked briefly to René and Armin. I told Armin how much I’d like to see one of his shows at Antaeus Theater in LA. I could also see something at Gates’s theatre while there. I went to see Gates, too, and she was incredibly energetic. She told me that she was using everything that she made at the con for her theatre because she didn’t get any funding whatsoever. Both Armin and Gates were rather partial to European theatre and new writing, which made me happy.

I missed the second Deep Space Nine talk because the line was just insane but at least I caught the first one. After leaving Frankfurt, Armin and René went on to Prague for a small con of about 120 people, which looked really good and a lot less stressful than the DST con. It was great to see René, Brent, and Armin but I think I’d rather avoid Destination Star Trek cons in the future and attend friendlier cons instead.