The Greatest Show in the Galaxy

For some reason, “The Greatest Show in the Galaxy” took place in Peterborough. This town is not really a metropolis but you get there from London King’s Cross St. Pancras in about an hour. I always enjoy a train ride unless the train service is interrupted and rail replacement service applies, which happens every weekend. That Saturday in May I got lucky and I had a smooth ride to Peterborough. Once there, volunteers directed us from the train station to the shuttle bus. The event took place at the Arena–about ten to fifteen minutes by bus–you were pretty much stranded there. I couldn’t attend the event for both days because I couldn’t stay overnight and there was no way I could make the Star Trek talk at 9.30 on Sunday as there weren’t any trains that early. Shame.

Before I went to see René I checked out the area. As usual there were stalls selling photos, autographs, and memorabilia as well as the autograph tables of the actors and writers. However, this time there was something really unique at the con–an animal trainer who had brought a caiman, small reptiles, snakes of different sizes, spiders, and a scorpion that you could hold for a small fee. I made a mental note to get back to him later. As René was not really busy I went to see him and said hello. He looked really good and we chatted for a while. He told me he was going to do something in London at the end of May and I promised him to come and see the show. Eventually, a few fans came by and I went to queue for the talk.

While standing in the queue I overheard a conversation. The volunteer who was checking the tickets had asked Robert Picardo for his ticket because he had not recognised him. Not a Trekkie, that’s for sure. A lot of the volunteers seemed to be pretty ignorant as far as Trek was concerned. The performance before the talk went way over schedule so we waited for a while. Finally, we were admitted. The talk was moderated by Robert Picardo. I guess the volunteer recognised him this time. There was huge applause when Chase Masterson, Nana Visitor, René, Colm Meaney, and Lolita Fatjo stepped on the stage. Chase Masterson suggested finding the best name for Lita (Lolita Fatjo). The winner would get a free communicator as a prize. Nobody really tried but people found the idea hilarious.

Then the question and answer session started: 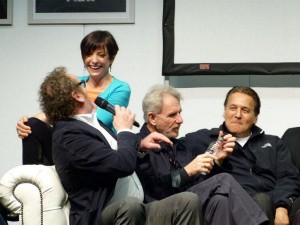 How did you feel about the darkness in seasons 6 and 7? René fell to the ground and the audience cracked up. Nana liked the darkness. Chase said: “The darker the better.” Lolita remarked that Deep Space Nine was her favourite of all the series: “All the stories were fantastic.” René added: “The more neurotic the show became the darker it became and the more unique in the world of Star Trek.” Robert Picardo remembered how excited he was being a guest on Deep Space Nine for one episode and how nice everyone was to him. René quipped: “You were on Deep Space Nine? Does anybody remember him?” Robert Picardo remarked, in a rather hurt voice: “I take that back. Everybody but René was very nice to me.” René immediately pretended that he was going to hurt Chase Masterson, to the great delight of the audience. 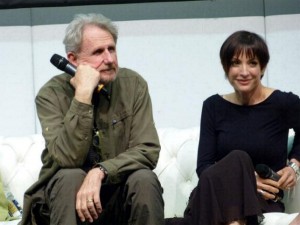 How did the actors deal with learning all those lines? René replied that it depended on the individual actor: “Colm would learn his lines during make up. He would then go off and know his lines. For the rest of us, we had to put in an effort.” How did Chief O’Brien get into Deep Space Nine? He was moved there to develop his character further. There were many risky subjects dealt with on the show. What was the top risky subject? René thought that “the editor should answer that.” Lolita explained that they had a wonderful writing staff, led by Michael Pillar: “It was very different from The Next Generation. Ira Behr didn’t want to keep it happy. He was open to many new ideas.” What was the most challenging episode for the writers? Lolita responded that the last episode was very emotional, the last two weeks of shooting the show. Robert Picardo remembered how they were tearing sets down while the actors were still shooting Voyager: “Don’t let the door hit you in the ass on your way out.” Was it like this for the Deep Space Nine cast? Nana replied: “They were pulling the Promenade apart. Everything was thrown out.” Chase added: “They were tearing down the set while the last episode was shot. The last thing left was the medicine cabinet. I took it.” Of course they had been told not to take anything but everything went into the garbage. 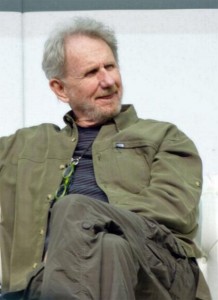 What was the weirdest thing a fan ever said to you? Nana replied: “Why do you let our daughter go into show business?” Robert Picardo remembered a lady from Texas: “How did you get your head so shiny?” What were the most exciting and the most boring part of the show? Lolita replied: “It was a fluke working on Deep Space Nine.” Nana added that it was Disneyland for actors: “You got to do everything. There were some of the best actors around. And it was daily work.” René responded: “Our daughter was at university. Our son was soon following up. My wife asked, ‘How do we afford this?’ I replied, “We sell the house or I get a series.’ I was employed for seven years, which is a long time in our business. You realise what a gift it is, not just the monetary consideration. A gift that keeps on giving. It doesn’t happen in our business that often.” If there had been a Deep Space Nine movie, would you have done it? Nana replied that she cried during the last two weeks: “Absolutely!” How do you think the Star Trek universe is going now? Does it need a rest for a few years? Lolita thought that a new series would be loved by the fans: “And there is a new movie in the works.” Who was the best guest actor? Robert Picardo fell to his knees to appeal to his colleagues but they remained unimpressed. Nana named Louise Fletcher and Chase, Max Grodenchik.” René nominated Harris Yulin in “Duet,” who played the Cardassian. 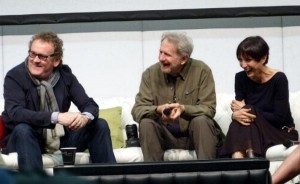 How did you manage the baseball episode? Was it natural talent or did you have to take lessons? Nana recalled that they hired someone to show her how to throw a ball. René mimicked Nana throwing a ball in a very girlish way. He then remarked that he was the umpire. Chase remembered that Max (Grodenchik) was too good to throw with his right hand; he had to use his left hand to look less professional. Lolita recalled: “That episode was a great break from the dark. Michael Pillar loved the episode.” Did your family watch the show? René replied that his family never watched the show. The kids were at university and his wife is a very busy person. Chase added: “You can’t force your family to watch your shows.” Were any of you Trekkies before you became part of it? René recalled that Nick Meyer asked him to be in Star Trek VI, a small part. Meyer warned him: “This is going to be a big deal. You don’t know what you’re getting yourself into.” René went to a convention instead of Colm Meaney and was asked by one of the fans: “What was it like to play Colonel West?” René didn’t have a clue who that character was because it was such an unimportant role: “And there were the fans wondering: ‘Who is this effete character, what’s he doing on Star Trek?’–The audience started to turn on me.”

Then the talk was over. The actors went for lunch and I checked out the animal trainer and his pets. 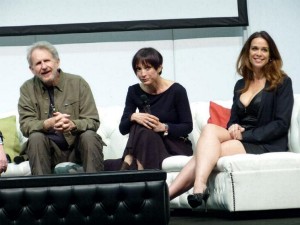 The caiman really appealed to me. I had always had a thing for crocodilians although I would never keep one–too dangerous. Funnily enough, caimans were sold as nice, docile pets that would remain small and manageable in a mall near where I used to live in Texas. In reality, caimans are more aggressive than crocodiles and grow to over 6 feet. This caiman was only three months old and used to being handled so I dared hold him. It was great! I had always wanted to do that. Actually I did it twice because I liked the small guy so much. And then there was the tarantula. I suffer from arachnophobia but it had become somewhat better over the years. I thought it would be a big step for me if I was able to hold a tarantula in my hand but I couldn’t bring myself to it. After about one hour of contemplation and advice from the animal trainer I let him put a small Chilean rose tarantula on my hand. It didn’t move, it just sat there. First I didn’t look at it but when I did it was really okay. The spider was very light and felt fuzzy. But then, tarantulas really are the teddy bears of spiders. I was so proud that I immediately ran to René and told him about it. He was quite averse to the idea of holding any spider because his kids had been bitten so badly by them. We chatted for a bit and then more fans came so I left. I met him again for the photo shoot and we took a great picture together. Then it was time to go and I returned to London after a great day at the Greatest Show in the Galaxy!

Side bar photo by Ethan Phillips; other photos by Karen Colohan