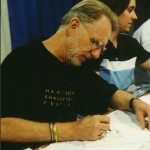 It was always a source of great pride and satisfaction to René that his fans supported his efforts to raise money for good causes at conventions, and through online auctions and special projects. Over the years, many organizations, including Doctors Without Borders, Amnesty International, and Heifer International, have benefited from René’s generous expenditures of time and energy, and from the expansive hearts and wallets of contributors.

Just before Thanksgiving 2019, René put together a video thank you note, celebrating a few of the many fans who’ve come to see him at conventions and pick up an Odo’s Bucket cartoon to support René’s charity fundraising efforts. (Use password “BUCKETS” to watch the video.)

If you never had a chance to watch René create one of his bucket drawings, there’s a very nice video from 2018 here.

After receiving funds from one of ORACLE’s events, René’s wife Judith wrote:

If you ever participated in any of ORACLE’s fundraising activities, or sent in a donation in exchange for René’s autograph, please know that your money  supported the life-changing, life-saving work of Doctors Without Borders and similar worthy groups, and we thank you.

How You Can Help