Windows on the World premiere

The film Windows on the World is having its premiere at the Sedona Film Festival, February 23 through March 3, 2019..

As described in this review: ” WINDOWS ON THE WORLD is a film that plays well on the multiple and nuanced meanings of its title (the famed restaurant on the World Trade Center’s 107th floor where Balthazar worked; the 43,600 windows of the Twin Towers, behind each pane of which stories were unfolding only to perish; the window cleaning job that was a portal for the next phase of Fernando’s journey). “

The film Raising Buchanan will have its world premiere at the Phoenix Film Festival, which runs from April 4 to 14, 2019.

According to the Festival website, the film will be shown: 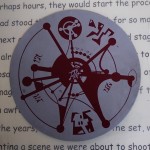 We completed another of our eBay auctions of photos and memorabilia from René’s storeroom, for the purpose of raising money for the life-saving work of Médecin San Frontières/Doctors Without Borders.

Thank you to all who participated!

René will be one of eight honorees at this year’s Theater Hall of Fame awards – the ceremony will be held in New York on November 12.

A well-deserved honor, as I suspect we all agree!

René enjoyed an amazing weekend October 19-21, 2018 at Destination Star Trek in Birmingham, United Kingdom. He drew over 250 of his Odo’s Bucket cartoons for generous fans who donated thousands of euros to support the worldwide, life-saving work of Médecin San Frontières/Doctors Without Borders!

An overall review of the convention has been posted on the StarTrek.com website. Enjoy!